Public outrage over the incident upsets Emilio Mendez - the tournament's biggest drawcard - and he wants to cut ties with Dega. When Erica is sent to calm him, Emilio becomes convinced he can't win without her. He demands she stay close and the media misinterprets their relationship, much to Jack's irritation. Meanwhile, danger lurks, threatening Emilio and Erica, and she must race against time to discover: who's trying to kill them and why?

From the elite inner sanctum of the Australian Open to the packed halls of Chadstone Shopping Centre, can Australia's favourite accidental heroine save Emilio, her job, and so-called relationship with Jack Jones?

'If you like Janet Evanovich's Stephanie Plum, you'll love this new heroine Erica Jewell from Melbourne author Ledson. In this debut . . . the heroine becomes involved with a team of vigilantes, with hilarious results.' Sunday Telegraph

'Blends romantic escapism and adventure. Ledson captivates her readers with characters that are memorable and real and refreshingly Australian. Reading her novel is akin to chatting to a very likeable friend.' West Australian

'This lively tale provides a good mixture of romantic escapism and thrills that is sure to appeal to fans of Stephanie Plum.' Canberra Times

'A witty, action-packed debut novel . . . a really fun Australian mystery with a loveable heroine and a mysterious hero.' Australian Bookshelf

'Delightfully funny, light-hearted and fast-paced . . . Move over Stephanie Plum - Erica Jewell is in the house ' Book Muster Down Under

'A terrific first novel that women everywhere are going to find hard not to love . . . an irresistibly entertaining read. Kathryn Ledson is indeed a real, rare and rather polished diamond.' Australian Women Online

'A rollicking tale with fabulous characters, lots of laughs and an exciting plot. A new star on the rise in Australian romantic fiction ' Shesaid.com.au

Be the first to review Grand Slam. 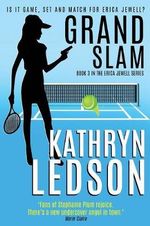 Romance Adventure
Hold on while we process your request.