A brand new collection of some of the best Grug titles in a fabulous orange slipcase.

Ted Prior is an Australian children's author, best known for his works on the children's series of Grug books.

Ted Prior previously worked as a police officer before studying at the National Art School in Sydney. In 1969, he earned a Diploma in Painting.

From 1971 to 1974 he taught at the National Art School in Newcastle, before moving to a farm in 1975. Prior's art mediums include drawing, etching, sculpture and assemblage.

His works have been displayed in individual and group exhibitions. As well as an author, Prior has also worked as an animator. 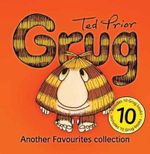