Guardians of the Galaxy

Through the Looking Glass : Volume 5

The Guardians of the Galaxy are caught in the pull of the Black Vortex! With the Slaughter Squad hot on their tails, the X-Men and the Guardians have to find somewhere to stash their precious cargo...but will the temptation of the Vortex's unknown power be too much for this band of misfits? Rocket leaps into action! Gamora goes on the offensive! Ronan is deposed! Star-Lord is defiant! This story has it all...but does it seem like the Guardians have forgotten something in all the cosmic craziness? Oh, that's right, Peter got elected President of Spartax! Wait, what?!

COLLECTING: GUARDIANS OF THE GALAXY 24-27, ANNUAL 1

About the Author
Brian Michael Bendis is an American comic book writer and former artist. He has won critical acclaim, including five Eisner Awards for both his creator-owned work and his work on various Marvel Comics books.

About the Illustrators
Frank Cho, born Duk Hyun Cho, is a Korean-American comic strip and comic book writer and illustrator, known for his series Liberty Meadows, as well as for books such as Shanna the She-Devil, Mighty Avengers and Hulk for Marvel Comics, and Jungle Girl for Dynamite Entertainment. The artist is noted for his figure drawing, precise lines, and depiction of well-endowed women

Valerio Schiti is an Italian comic book artist. After his graduation as an architect he began his career in comics in Italy for Editoriale Aurea and then in USA for IDW on titles such “Dungeons & Dragons: Eberron” with Paul Crilley, “Teenage Mutant Ninja Turtles micro series: Donatello” with Brian Lynch and Tom Waltz and “Battle Beasts” with Bobby Curnow.

Award-winning comic-book creator Brian Michael Bendis is one of the most successful writers working in mainstream comics today. He has helmed a renaissance for Marvel's popular Avengers franchise, writing every issue of New Avengers and launching Avengers, Mighty Avengers and Dark Avengers. He has also written the event projects House of M, Secret War, Secret Invasion and Siege. Bendis is one of the architects of Marvel's Ultimate line of comics, having written every issue of Ultimate Spider-Man since its launch in 1999, as well as Ultimate Fantastic Four, Ultimate X-Men, Ultimate Marvel Team-Up, Ultimate Origin, Ultimate Six and the Ultimate Enemy trilogy.

The introduction of multiracial Ultimate Spider-Man Miles Morales made USA Today's front page and went on to become a hotbed topic on Fox News, CNN, The Daily Show with Jon Stewart, The Howard Stern Show and more. Bendis' creator-owned projects include Scarlet with Alex Maleev, Brilliant with Mark Bagley, the Eisner Award-winning Powers with Mike Oeming and the Hollywood tell-all Fortune and Glory. Bendis is also the creator of Image Comics' Jinx line of crime comics, which has spawned the graphic novels Goldfish, Fire, Jinx and Torso with Marc Andreyko, and Total Sell Out.

Sony and FX have completed principal photography on the pilot for Powers with Bendis as executive producer, and he's adapting Fire for Universal Pictures as a starring vehicle for Zac Efron. Bendis is also a writer and consulting producer for the Disney XD series Ultimate Spider-Man. As a member of Marvel Studios' Creative Committee, he has consulted on the films Iron Man and Iron Man 2, Captain America: The First Avenger, Thor, and Marvel's The Avengers. He is head writer of the massive multiplayer online game Marvel Universe for Marvel and Gazillion games.

Be the first to review Guardians of the Galaxy. 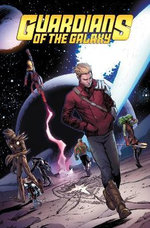 Guardians of the Galaxy

Graphic novels: superheroes & super-villains Guardians of the Galaxy
Hold on while we process your request.