The interstellar array which links worlds together wakes to find it has enemies...
The Fourth Carinad Empire stretches across hundreds of settled worlds and stellar cities, and thousands of light years. The Empire's people and data are linked by a space-folding gates array controlled by the Emperor and his cohorts. When the array evolves into a sentient entity, it recognizes the Emperor as its foe.

Danny Andela, once known as The Imperial Hammer, withdrew from the Imperial Rangers decades ago, her reputation in tatters. She lives on her family's star barge, waiting to die of a rare disease: old age. She would be the array's perfect weapon against the Emperor, except she no longer gives a damn--about anything.

Then Danny learns that the military disaster which essentially ended her life might possibly have been arranged by the Emperor himself...

This is epic science fiction at its finest. Realistic far future worlds. Incredible characters and scenarios.

Cameron knows how to tell a story, regardless of whether we are going back in history or forward in time.

Until this book I had forgotten just how much I love good science fiction and Cameron's is not just good, it's exceptional.

The concepts are staggering and intensely interesting.
__

Cameron Cooper is the author of The Indigo Reports science fiction series and the alter ego for an Amazon #1 bestselling author in an unrelated genre. The Indigo Reports was originally conceived as a one-off series, but readers demanded more. The Imperial Hammer series releases in early 2020.

Cameron tends to write space opera short stories and novels, but also roams across the science fiction landscape. Cameron was raised on a steady diet of Asimov, Heinlein, Herbert, McCaffrey, and others. Peter F. Hamilton and John Scalzi are contemporary heroes. An Australian Canadian, Cam lives near the Canadian Rockies.

Be the first to review Hammer and Crucible. 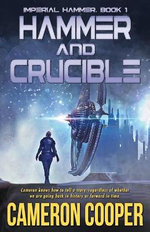