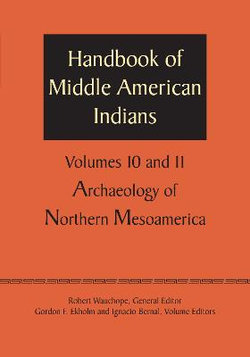 Archaeology of Northern Mesoamerica comprises the tenth and eleventh volumes in the Handbook of Middle American Indians, published in cooperation with the Middle American Research Institute of Tulane University under the general editorship of Robert Wauchope (1909-1979). Volume editors of Archaeology of Northern Mesoamerica are Gordon F. Ekholm and Ignacio Bernal. Gordon F. Ekholm (1909-1987) was curator of anthropology at The American Museum of Natural History, New York, and a former president of the Society for American Archaeology. Ignacio Bernal (1910-1992), former director of the Instituto Nacional de Antropologia e Historia, Mexico, was director of the Museo Nacional de Antropologia in Mexico and also a past president of the Society for American Archaeology.

Volumes 10 and 11 describe the pre-Aztec and Aztec cultures of Mexico, from central Veracruz and the Gulf Coast, through the Valley of Mexico, to western Mexico and the northern frontiers of these ancient American civilizations.

The thirty-two articles, lavishly illustrated and accompanied by bibliography and index, were prepared by authorities on prehistoric settlement patterns, architecture, sculpture, mural painting, ceramics and minor arts and crafts, ancient writing and calendars, social and political organization, religion, philosophy, and literature. There are also special articles on the archaeology and ethnohistory of selected regions within northern Mesoamerica.

Be the first to review Handbook of Middle American Indians.