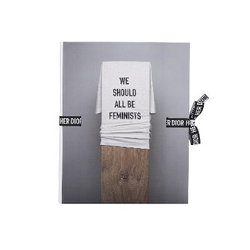 A powerful collection of photographs and essays by trailblazing women that celebrates Maria Grazia Chiuri's feminine and feminist spirit within the House of Dior.

Since being appointed the first female creative director of Dior in 2016, Maria Grazia Chiuri has infused the illustrious fashion brand with a strong current of femi-nism. Her approach is at once refreshing and needed, while still paying homage to the avant-garde ethos that has been at the heart of the house since its founding by Christian Dior in 1947.

Thought-provoking quotes and poems from inspirational women--Chimamanda Ngozi Adichie, Linda Nochlin, Claire Fontaine, Judy Chicago, and Tomaso Binga, to name a few--accompany the striking photographs. Showcasing Chiuri's haute couture and ready-to-wear collections from 2017 to 2021, Her Dior captures the creative director's innovations at the house--where, for the past five years, she's reclaimed the narrative creating Dior fashions for women, by women.

Be the first to review Her Dior.