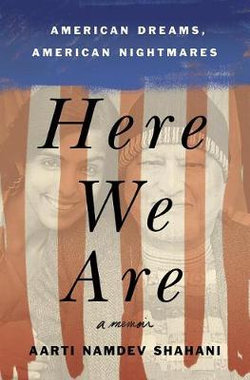 After arriving in New York City in the 1980s, the Shahani family opens a small electronics store. Aarti, their youngest child, wins a scholarship to one of Manhattan’s most elite prep schools. They are well on their way to the American Dream, until their fortunes turn. When they mistakenly sell watches and calculators to the wrong people—members of the Cali drug cartel—the family gets caught in a legal case that destroys them, incrementally, over the course of 15 years.

Here We Are is the hearing the Shahani family never had, despite all the time they spent being judged. Aarti’s father never recovers from the humiliation. And she, who has the chance to leave and live a better life, forever feels singularly defined by his (and their) crisis. She’s torn between moving on and looking back.

This family saga is full of colorful characters: a feisty mom who’ll take sewing shears to anyone who threatens her blood; a big brother, caught between the Old World and New, who agrees to an arranged marriage; a big sister who refuses to lose her sense of humor, even in the notorious jail Rikers Island.

As we follow the Shahanis' extreme ups and downs, Here We Are becomes a fascinating insider account of the elusive nature of legality and of the deep schism in American culture by which the “deserving” are deified and the “undeserving” demonized, at times relentlessly.

Ultimately, Here We Are is a coming-of-age story, a love letter from an outspoken modern daughter to her soft-spoken Old World father. She never expected they’d become best friends.

Aarti Namdev Shahani is the author of memoir Here We Are: American Dreams, American Nightmares. She is a correspondent for NPR based in Silicon Valley, covering the largest companies on earth.

Her reporting has received awards from the Society of Professional Journalists, a regional Edward R. Murrow Award, and an Investigative Reporters & Editors Award. Before journalism, Shahani was a community organizer in New York City, helping prisoners and families facing deportation. Her activism was honored by the Union Square Awards and Legal Aid Society.

She received a Master's in Public Policy from the Harvard Kennedy School of Government, with generous support from the university and the Paul and Daisy Soros Fellowship for New Americans. She completed her bachelor's degree in anthropology at the University of Chicago.

She was among the youngest recipients of the Charles H. Revson Fellowship at Columbia University and is an alumna of A Better Chance, Inc. Shahani grew up in Flushing, Queens—in one of the most diverse zip codes in the country—and believes every American should visit her hometown to understand what makes America great.

Be the first to review Here We Are.