How did Damien Echols (one of ‘The West Memphis Three’ wrongfully imprisoned and released after 20+ years) survive and transcend his ordeal on death row? High Magick.

Most people either think of magic as stage illusions or an occult practice involving dark rituals. “Magick is an incredibly deep, meaningful, spiritual tradition that equals the Eastern practices of Buddhism and Taoism in beauty,” says Echols. “It’s an ancient discipline that lets you literally change reality by working with the divine energies of creation.” Echols offers key meditations, insights, and step-by-step instruction to awaken the power of magick in your own life.

Damien Echols was born in 1974 and grew up in Mississippi, Tennessee, Maryland, Oregon, Texas, Louisiana, and Arkansas.

When he was 18, Damien and two other young men were wrongfully convicted of murder, eventually becoming known as the West Memphis Three. Having received a death sentence, Damien spent almost two decades on death row, until he was released in 2011.

While in prison, Damien was ordained into the Rinzai Zen Buddhist tradition. He is the subject of Paradise Lost, a three-part documentary series produced by HBO, and West of Memphis, a documentary produced by Peter Jackson and Fran Walsh.

Damien is also the author of the New York Times bestseller Life After Death and Yours For Eternity (with his wife Lorri Davis). Damien teaches classes on magick around the country and works as a visual artist.

Be the first to review High Magick. 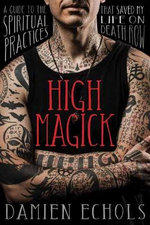