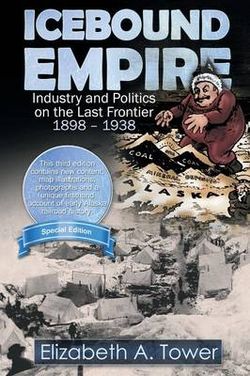 Industry and Politics on the Last Frontier

Stories of courage and grit behind Alaska's fierce independence. A mysterious vigilante murder in Nebraska, the Alaska Gold Rush, muckraking politics that lead to the suicide of an American hero and the ambitious, wealthy men vying for control of Alaskan business and industry at the turn of the twentieth century. This third edition has been released with new, never-before-published content outside the Alaska Historical Society Journals. It reveals a first-hand account of the early development of the Alaska railway system and the story behind the richly funded, entrepreneurial Alaska Syndicate initiative that lead to the famous "Keystone Canyon Shoot-out." The discovery of a hand-written letter by George Hazelet to Catherine Wilson, a nomadic chronicler of events in the early Alaska territory and publisher of the historical Copper Tints, gives us an encompassing and refreshing first-hand account of the early railway development in what is still known today as the "Last American Frontier." This is the true story revealed of three men who were the prime movers behind an ambitious, turn-of-the-twentieth-century plan to develop Alaska-the J. P. Morgan - Guggenheim Alaska Syndicate, builder of the Kennecott Copper Mining Company, as well as the Copper River & Northwestern Railway. George Cheever Hazelet, Stephen Birch and Captain David Jarvis were true pioneers of this great Alaska Territory and were backed by enormously wealthy men to whom failure was unacceptable. The challenges and setbacks of this gallant trio have been beautifully captured and documented in this third edition by the award-winning Alaska historian and author, the late Elizabeth A. Tower, MD. The re-release of this book with its additional content stands as a tribute to Dr. Tower's memory and the life she led as a true Alaskan.

Be the first to review Icebound Empire.

by Elizabeth A. Tower and J. H. Clark