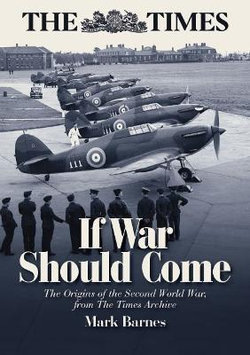 If War Should Come: the Origins of the Second World War from the Times Archive

This is a pictorial look at aspects of life in Britain and in other parts of Europe in the run up to the start of WWII using press photographs from the era. It examines the reality behind the claim that Britain was a nation prepared for the coming war. The images reproduced here are now in the archives of The Timesand The Sunday Times.

The 1930s are put in context by referencing back to the end of the Great War and the Versailles Treaty. The book explores how Britain and, to a lesser extent, France were confronted with the next world war even as they struggled, in both material and psychological terms, to recover from the previous one.

Another theme is whether the press was complicit in the country's unpreparedness for what was to come. The Timesunder the editorship of Geoffrey Dawson, seemed in every sense, to be an organ of the establishment and Dawson was more than happy to temper the paper's coverage of Hitler's excesses so as not to undermine the appeasement policy of Neville Chamberlain and Dawson's close friend Edward Wood, ennobled as Lord Halifax, Britain's Foreign Secretary.

The photographs in If War Should Comepresent a fascinating glimpse of turbulent times. Striking and memorable images are accompanied by informative and insightful captions to give a different but utterly absorbing perspective on this fascinating era.

Be the first to review If War Should Come: the Origins of the Second World War from the Times Archive.

If War Should Come: the Origins of the Second World War from the Times Archive