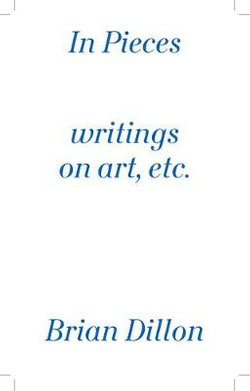 by Brian Dillon
Paperback
Publication Date: 16/03/2021
Be the first to write a review
Tweet

Essays and criticism on artist, writers, and living as a European writer in the midst of Brexit.In Pieces offers critical, polemic, and personal essays written by Brian Dillon in the past decade. Writing about such major artists as Diane Arbus, Claude Cahun, and William Eggleston, Dillon investigates the slippages between life, work, and reputation. He attends to the formal strangeness of the art of Julia Margaret Cameron, Hannah Hoech, Eileen Gray, and Loie Fuller. And he finds contemporary echoes of their dissident modernism in the sculpture of Helen Marten, Eva Rothschild, and Enrico David.

In writing about such contemporary writers as Eimear McBride and Claire Louise Bennett, he looks for the kind of formal adventure he is convinced can and must accompany the personal or political. Dillon's personal essays include his memories of the Prozac craze of the 1990s, a discussion of the influence of David Bowie, and a piece about a family member's paranoid relationship with photography. Finally, Dillon reflects on England and Englishness, offering direct and oblique perspectives on living as a European writer in the midst of the Brexit crisis.

Brian Dillon is U.K. editor of Cabinet magazine and teaches at the Royal College of Art, London.

Be the first to review In Pieces.