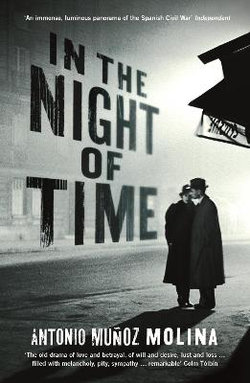 In the Night of Time

The internationally bestselling tour de force of love and tragedy in the Spanish Civil War.

October 1936. Spanish architect Ignacio Abel arrives at Penn Station, the final stop on his journey from war-torn Madrid, where he has left behind his wife and children, abandoning them to uncertainty. Crossing the fragile borders of Europe, he reflects on months of fratricidal conflict in his embattled country, his own transformation from a bricklayer's son to a respected bourgeois husband and professional, and the all-consuming love affair with an American woman that forever alters his life.

A rich, panoramic portrait of Spain on the brink of civil war, In the Night of Time details the passions and tragedies of a country tearing itself apart. Compared in scope and importance to War and Peace, Munoz Molina's masterpiece is the great epic of the Spanish Civil War written by one of Spain's most important contemporary novelists.

About the Author
Antonio Munoz Molina was born in 1956 in Ja.n, Spain. After studying at the University of Granada, he began writing for newspapers and published his first novel Beatus Ille in 1986. Now the author of more than a dozen novels, amongst which are Sepharad, A Manuscript of Ashes and In Her Absence, Mu.oz Molina has also written for the Spanish newspapers ABC and El Pa.s. He has taught at the University of Virginia and CUNY and, at the invitation of Norman Mailer, at Bard College, where In the Night of Time first began to take shape. He has served as Director of the Instituto Cervantes in New York, and is the recipient of the Jerusalem Prize, the Planeta Prize and many others. He lives in Madrid and New York.

Be the first to review In the Night of Time.

In the Night of Time