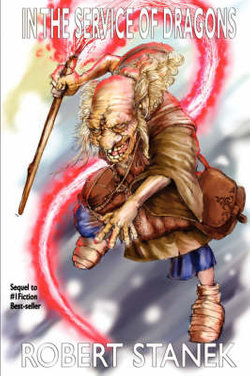 In the Service of Dragons

The #1 bestselling series finally back in print for the 20th Anniversary has been translated into 12 languages and sold over 5 million copies worldwide! IN THE SERVICE OF DRAGONS #1 begins a new chapter in the epic fantasy adventure which began with THE KINGDOMS AND THE ELVES OF THE REACHES #1, a #1 Fiction bestseller for FOURTEEN WEEKS and a Kids & YA Top 10 Bestseller for THREE YEARS at Audible.com.

In his acclaimed The Kingdoms and the Elves of the Reaches books, Robert Stanek introduced us to the story of Ruin Mist, an extraordinary world of magic, adventure, and intrigue. Now in the eagerly awaited follow-up, he once again proves himself a wonderful storyteller with a gift for fast pacing and believable storylines.

Already hailed as a classic, Robert Stanek's powerful series has been enjoyed by readers all over the world. The Elves of the Reaches returned from exile, bringing grave news. War came to the Kingdoms, and many perished in the turmoil and unrest. An attempt was made to kidnap a princess and assassinate a king. Now, from the ancient past a dark power returns. "The Fourth Wind blows across the mountain tops," they say. And the Twelve Clans emerge from myth and memory. As prophecy becomes reality, the factions struggle for control only to further divide the lands. Some would say that it was foolish for King Andrew Alder to support the Elves of the Reaches and send men to aid their cause when Men in all lands were being put to the test of steel.

In the North, men back their words with action. Against a backdrop of treachery and intrigue, murder and mayhem, the price of freedom is high. Many will pay with their lives. Many will succumb to imprisonment and enslavement; for when alliances shatter, old hatreds rise anew and the plotting and scheming begin. Bold, inventive, brilliantly imagined, In the Service of Dragons is a novel of magic and wonder-a tale of pure excitement you will not soon forget.

ABOUT THE AUTHOR: A gifted and distinguished writer, respected and skilled teacher and recipient of our nation's highest flying honor, the Distinguished Flying Cross, Robert Stanek wrote over 200 books of both fiction and nonfiction in his 30-year career. Although his works were published and/or distributed by nearly every major US publisher, Robert operated against the grain and became the first breakout author of the digital publishing movement. The first to serialize an ebook, the first to e-author a bestseller, and the first to e-author a digital audio bestseller. Robert is the recipient of multiple awards recognizing his outstanding contributions and excellence in writing, and a recent nominee for a Lifetime Achievement award. Translated into 57 languages, Robert Stanek's books have sold nearly 20 million copies worldwide.

"Robert Stanek is one of our most featured and respected Kids & Young Adults authors." -- The Audio Book Store

"Word of mouth turned it into a bestseller. Very satisfying." -- The Fantasy Guide

Be the first to review In the Service of Dragons.

In the Service of Dragons