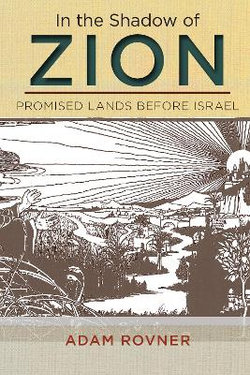 In the Shadow of Zion

From the late nineteenth century through the post-Holocaust

era, the world was divided between countries that tried to expel their Jewish

populations and those that refused to let them in. The plight of these

Christians, authors and adventurers, politicians and playwrights, and rabbis

and revolutionaries all worked to carve out autonomous Jewish territories in

remote and often hostile locations across the globe. The would-be founding

fathers of these imaginary Zions dispatched scientific expeditions to far-flung

regions and filed reports on the dream states they planned to create. But only

obscured the fact that eminent Jewish figures, including Zionism's prophet,

In the Shadow of Zion brings to life the amazing true

land of Israel. It is the only book to detail the connections between these

schemes, which in turn explain the trajectory of modern Zionism. A gripping

narrative drawn from archives the world over, In the Shadow of Zion

recovers the mostly forgotten history of the Jewish territorialist movement,

and the stories of the fascinating but now obscure figures who championed it.

Provocative, thoroughly researched, and written to appeal to

a broad audience, In the Shadow of Zion

offers a timely perspective on Jewish power and powerlessness.

Be the first to review In the Shadow of Zion.

In the Shadow of Zion