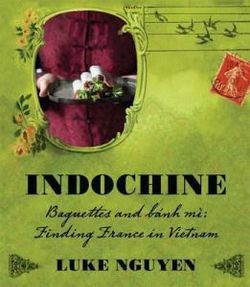 "Indochine" sees Red Lantern's Luke Nguyen revisit his beloved Vietnam and seek out the food and cultural remnants of this former French colonial empire. On his regular visits to Vietnam today, Luke is often struck by the appearance of people wearing berets, speaking French and the aromas of coffee and butter emanating from cafes and patisseries. The recipes and accompanying stories showcase the French influence upon Vietnamese history and cuisine. Against a backdrop of grand colonial hotels, bars, restaurants and terraces, to private estates dressed in antiques and textiles of the period, Luke talks to chefs, bakers and family members to extract the very essence of French-Vietnamese cuisine. From coffee and croissants at breakfast to high tea and supper, Luke unravels the origins of Vietnamese dishes such as pho, which began life as a 'pot au feu', and experiments with new versions of traditional Vietnamese food. "Indochine" appeals to lovers of French, Vietnamese food and travel alike. This title is from the author of best-selling cookbooks "Secrets of the Red Lantern" and "The Songs of Sapa".
It features vibrant food photography shot entirely in Vietnam and more than 100 regional recipes showcasing Vietnam's French culinary roots.

Luke Nguyen is a renowned Vietnamese-Australian chef, best known for his television series Luke Nguyen's Vietnam, Luke Nguyen's Greater Mekong and more recently Luke Nguyen's France. Born in a Thai refugee camp after his parents escaped their homeland in Vietnam, Luke's family made their way to Australia where Luke was raised in Cabramatta.

Luke has written six cookbooks: Secrets of the Red Lantern, Songs of Sapa, Indochine, Greater Mekong and The Food of Vietnam and Luke Nguyen's France. He now bases himself in Ho Chi Minh City, where he runs the city's only professional cooking studio, Grain by Luke, described by him as "a kind of speakeasy cooking school". He continues to have a big profile in Australia, courtesy of his books and the continuing success of his television career.

Be the first to review Indochine.