Her part as Ilsa Lund in Casablanca (1942) co-starring Humphrey Bogart made Ingrid Bergman (born in Stockholm in 1915) a Hollywood icon, followed by the Hemingway adaptation For Whom the Bell Tolls (1943) with Gary Cooper, Cukor's Gaslight (1944) and Hitchcock's Spellbound (1945). Reflecting Ingrid Bergman's career and based on the family archive, this photo book features unpublished pictures that her father Justus took when she was a young and aspiring actress in Stockholm, film stills, and famous paparazzi shots. A breathtaking beauty, she was famous for her affair with photographer Robert Capa and her controversial marriage with Italian filmmaker Roberto Rossellini, with whom she had three children. Ingrid Bergman received three Academy Awards: Gaslight (Best Actress, 1945), Anastasia (Best Actress, 1956), Murder on the Orient Express (Best Supporting Actress, 1975). 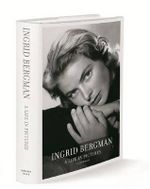