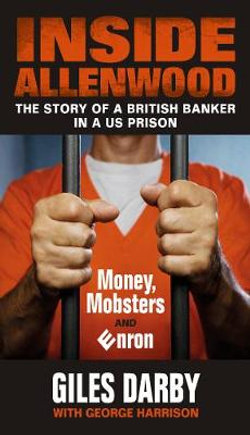 The Story of a British Banker inside a US Prison: Money, Mobsters and Enron

Inside Allenwood: The Story of a British Banker in a US Prison - Money, Mobsters and Enron is the revealing and often heart-rending memoir of Giles Darby - a British banker jailed in 2008 for his involvement in a $7m fraud against his employer, NatWest. Giles and his co-defendants, David Bermingham and Gary Mulgrew, became the subject of extensive media coverage when the US government demanded their extradition in relation to the collapse of the energy giant Enron. The NatWest Three, as they came to be known, soon found themselves the subject of a national debate about why three British citizens accused of defrauding a British bank should be tried in America, and then at the centre of a political scandal going all the way to the Prime Minister, Tony Blair. Separated from their families and unable to travel, the NatWest Three faced the prospect of up to 35 years in prison if they were found guilty. After almost ten years fighting their extradition and, desperate to bring the ordeal to a close, the Three eventually reached a plea deal with prosecutors to serve 37 months in prison each as restitution for one count of wire fraud. Giles served part of his sentence in Allenwood prison, Pennsylvania, and was then allowed to return to the UK to finish his time. In stark contrast to the luxurious life of a high-flying banker, Giles was forced to adapt quickly in order to keep his health and sanity intact and passed the time by writing letters to his family back in the UK that detailed the daily events of the prison: the drudgery of lock-downs, the dangers of routine violence and the agony of being separated from everyone he loved. But alongside the horror stories about gang beatings and brutality, Giles also wrote about the larger-than-life characters he met and the unexpected antics of his fellow inmates. AUTHOR: Giles Darby grew up in South West England. He spent most of his career in finance, brokering deals on behalf of NatWest bank. Since leaving prison, he now owns and runs a chain of pubs and hotels. He is also the father of successful YouTube entrepreneurs Elle Darby and Lucy Jessica Carter.

Be the first to review Inside Allenwood.