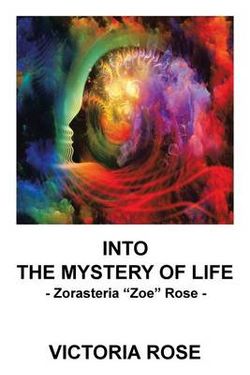 Into the Mystery of Life

The planet Gareth is being destroyed as the Rose sisters prepare to leave. They agree to travel in one body--Crystal's. She takes the energy spirits of Poni and Zoe into herself, reduces her body to radio light waves, and travels through space at the speed of light, arriving via sunbeam at the Rocky Mountains of Colorado and materializing on the naked back of sunbathing Mac Dakota, a.k.a Alleycatmac.

Into the Mystery of Life: Zorasteria -Zoe- Rose is the combination of parts three and four of a four-part tetralogy. In part three, Zoe finds her man, Sheriff Thomas Day; she and Poni get permanent bodies; Mac and Tom open themselves to radical healings by Crystal; and the three sisters become pregnant. In part four, the three couples, who have formed a crime-fighting team, take on the evil Lilith Saitan, Princess of Hell, High Priestess of Dambala.

Zoe tells us more about Gareth--their education, means of exchange, extended family, and why they used hydrogen as their energy source. Into the Mystery of Life is significantly more than a simple sci-fi romance.

Be the first to review Into the Mystery of Life.

Into the Mystery of Life