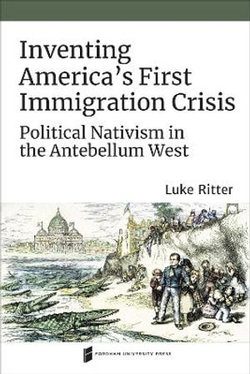 Political Nativism in the Antebellum West

Why have Americans expressed concern about immigration at some times but not at others? In pursuit of an answer, this book examines America's first nativist movement, which responded to the rapid influx of 4.2 million immigrants between 1840 and 1860 and culminated in the dramatic rise of the National American Party. As previous studies have focused on the coasts, historians have not yet completely explained why westerners joined the ranks of the National American, or "Know Nothing," Party or why the nation's bloodiest anti-immigrant riots erupted in western cities--namely Chicago, Cincinnati, Louisville, and St. Louis. In focusing on the antebellum West, Inventing America's First Immigration Crisis illuminates the cultural, economic, and political issues that originally motivated American nativism and explains how it ultimately shaped the political relationship between church and state.

In six detailed chapters, Ritter explains how unprecedented immigration from Europe and rapid westward expansion re-ignited fears of Catholicism as a corrosive force. He presents new research on the inner sanctums of the secretive Order of Know-Nothings and provides original data on immigration, crime, and poverty in the urban West. Ritter argues that the country's first bout of political nativism actually renewed Americans' commitment to church-state separation. Native-born Americans compelled Catholics and immigrants, who might have otherwise shared an affinity for monarchism, to accept American-style democracy. Catholics and immigrants forced Americans to adopt a more inclusive definition of religious freedom.

This study offers valuable insight into the history of nativism in U.S. politics and sheds light on present-day concerns about immigration, particularly the role of anti-Islamic appeals in recent elections.

Be the first to review Inventing America's First Immigration Crisis.