An Anthology of Short Stories

Ah go on...tell us.
New York Times bestselling authors Maeve Binchy and Marian Keyes top an impressive roster of the Emerald Isle's most popular women writers and prove that when it comes to spinning a good yarn, the Irish are the best in the business. Showcasing dazzling wit and remarkable insight in short stories that run the gamut from provocative to poignant, these Irish women will tug at your heartstrings and have you crying with laughter in no time. She did what?
In Maeve Binchy's "Carissima," a longtime ex-pat and free spirit returns to Ireland from Sicily and shakes things up for her family, who finds her life utterly scandalous. In "Soulmates," by Marian Keyes, one woman's relationship is so bleedin' perfect in every way that it's driving her friends up the wall. In Cathy Kelly's "Thelma, Louise and the Lurve Gods," two women on a madcap, Stateside road trip have completely opposite reactions to a pair of insanely good-looking men. In these stories, and throughout this fabulous collection, Ireland's finest women authors celebrate the joys and perils of love, the adventure and constancy of female friendships, and their own irresistible brand of Irish charm.

Maeve Binchy was born in County Dublin and educated at the Holy Child convent in Killiney and at University College, Dublin. After a spell as a teacher she joined the Irish Times.

Her first novel, Light a Penny Candle, was published in 1982 and she went on to write over twenty books, all of them bestsellers. Several have been adapted for cinema and television, most notably Circle of Friends and Tara Road.

Maeve Binchy received a Lifetime Achievement Award at the British Book Awards in 1999 and the Irish PEN/A.T. Cross award in 2007.

In 2010 she was presented with the Bob Hughes Lifetime Achievement Award at the Bord Gais Irish Book Awards by the President of Ireland. She was married to the writer and broadcaster Gordon Snell for 35 years, and died in 2012.

Cathy Kelly is published around the world, with millions of books in print. A No.1 bestseller in the UK, Ireland and Australia, her trademark is warm Irish storytelling about modern life, always with an uplifting message, sense of community and strong female characters at the heart.

She lives with her family and their three dogs in County Wicklow, Ireland. She is also an Ambassador for UNICEF Ireland, raising funds and awareness for children orphaned by or living with HIV/AIDS. Marian Keyes was born in Limerick in 1963, and brought up in Cavan, Cork, Galway and Dublin. She studied law and accountancy before turning to writing. Her first novel Watermelon was published in Ireland in 1995, where it was an immediate, runaway success.

Marian Keyes is now one of the most successful Irish novelists of all time and is published in thirty nine different languages. She lives in Dún Laoghaire with her husband Tony.

Marian Keyes is the international bestselling author of Watermelon, Lucy Sullivan is Getting Married, Rachel's Holiday, Last Chance Saloon, Sushi for Beginners, Angels, The Other Side of the Story and Anybody Out There.

Her two collections of journalism, Under the Duvet and Further Under the Duvet, are also available in Penguin. Marian lives in Dublin with her husband.

Be the first to review Irish Girls about Town. 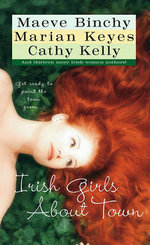