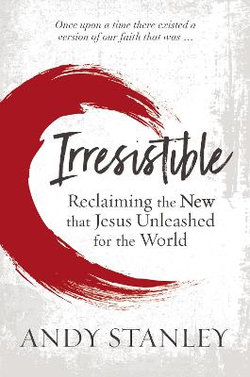 Reclaiming The New That Jesus Unleashed For The World

Once upon a time there existed a version of our faith worth living and dying for, something the world found irresistible. Men and women pursued it at the risk of persecution, job loss, and eviction from their homes, temples, and society.

In Irresistible, pastor and author Andy Stanley shows how distortions of the gospel have left us with an anemic version of Christianity that undermines our credibility and our evangelistic effectiveness. He takes readers on a fascinating journey back in time to recover a faith so rich, so dynamic, so disruptive, that it could not be ignored, marginalized, or eradicated.

Rather than working harder to make Christianity more interesting, we need to recover what once made faith in Jesus irresistible to the world.

Communicator, author, and pastor Andy Stanley founded Atlanta-based North Point Ministries in 1995. Today, NPM consists of six churches in the Atlanta area and a network of more than 70 churches around the globe that collectively serve nearly 118,000 people weekly.

As host of Your Move with Andy Stanley, which delivers over seven million messages each month through television and podcasts, and author of more than 20 books, including The New Rules for Love, Sex & Dating; Ask It; How to Be Rich; Deep & Wide; Visioneering; and Next Generation Leader, he is considered one of the most influential pastors in America. Andy and his wife, Sandra, have three grown children and live near Atlanta.

Be the first to review Irresistible.