Is the Union Now Secure?

The Scottish Independence Referendum and Its Aftermath

by Lindsay Paterson, John Curtice,  Rachel Ormston and others

The Scottish Referendum 2014 is an analysis of why the Scottish independence referendum happened, how and why Scotland ultimately voted 'No', and public attitudes towards the steps that should now be taken following the No vote. Produced by a team headed by John Curtice, Professor of Politics at the University of Strathclyde and the country's leading expert on electoral behaviour and social attitudes, this definitive book provides an accessible account of the origins, outcome and consequences of the independence referendum held in Scotland in September 2014. As such, it addresses three main questions: First, why did the referendum happen? Was it the product of growing support for independence since 1999 stimulated, perhaps, by the experience of devolution, or was it a political accident? Second, has the outcome secured Scotland's position in the Union? Did the level and the character of support for staying in the Union suggest that a clear majority of people in Scotland are now firmly committed to remaining in the UK? Third, what should happen now? Could further devolution provide the basis for a stable constitutional settlement?Or will it simply expose new tensions and difficulties? This is a must-read for anyone with an interest in Scotland's future relationship with the rest of the UK.

Be the first to review Is the Union Now Secure?. 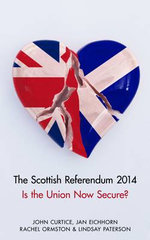 Is the Union Now Secure?

by Lindsay Paterson, John Curtice,  Rachel Ormston and others

Politics & government Elections & referenda Nationalism
Hold on while we process your request.