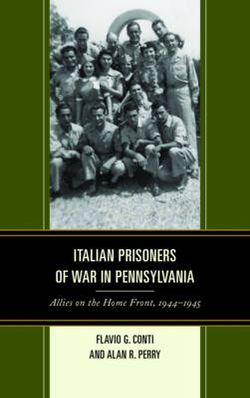 Allies on the Home Front

During World War II 51,000 Italian prisoners of war were detained in the United States. When Italy signed an armistice with the Allies in September 1943, most of these soldiers agreed to swear allegiance to the United States and to collaborate in the fight against Germany. At the Letterkenny Army Depot, located near Chambersburg, Pennsylvania, more than 1,200 Italian soldiers were detained as co-operators. They arrived in May 1944 to form the 321st Italian Quartermaster Battalion and remained until October 1945. As detainees, the soldiers helped to order, stock, repair, and ship military goods, munitions and equipment to the Pacific and European Theaters of war. Through such labor, they lent their collective energy to the massive home front endeavor to defeat the Axis Powers. The prisoners also helped to construct the depot itself, building roads, sidewalks, and fences, along with individual buildings such as an assembly hall, amphitheater, swimming pool, and a chapel and bell tower. The latter of these two constructions still exist, and together with the assembly hall, bear eloquent testimony to the Italian POW experience. For their work the Italian co-operators received a very modest, regular salary, and they experienced more freedom than regular POWs. In their spare time, they often had liberty to leave the post in groups that American soldiers chaperoned. Additionally, they frequently received or visited large entourages of Italian Americans from the Mid-Atlantic region who were eager to comfort their erstwhile countrymen. The story of these Italian soldiers detained at Letterkenny has never before been told. Now, however, oral histories from surviving POWs, memoirs generously donated by family members of ex-prisoners, and the rich information newly available from archival material in Italy, aided by material found in the U.S., have made it possible to reconstruct this experience in full. All of this historical documentation has also allowed the authors to tell fascinating individual stories from the moment when many POWs were captured to their return to Italy and beyond. More than seventy years since the end of World War II, family members of ex-POWs in both the United States and Italy still enjoy the positive legacy of this encounter.

Be the first to review Italian Prisoners of War in Pennsylvania.