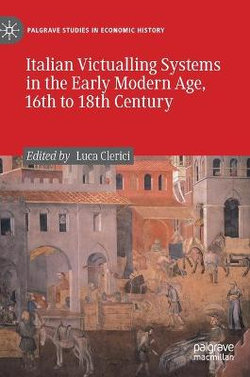 This book illustrates the complexity and variety of victualling systems in early modern Italy. For a long time, the historiography of urban provisioning systems in late medieval and early modern times featured a conceptual opposition between victualling administration and the market. In this book, on the contrary, the term 'victualling system' (sistema annonario) is employed according to its historical meaning, designating an organised set of public and private channels, evolved typically in urban contexts, for the procurement and distribution of the goods essential for the daily life of common people. According to this definition, specifically, a victualling system included also the market, as one of the different channels for the procurement and distribution of goods. What characterises the Italian case in the European context are both the earliness of these institutions and the long-lasting political and economic fragmentation of the peninsula: these factors determined the great variety and complexity of the solutions adopted. In order to show these features, the analysis focuses on four central issues: the configuration of systems, institutional pragmatism and variety, articulation of circuits, and plurality of actors. The seven relevant case-studies included in this book, all based on direct archival research, cover a wide range of geographical contexts and institutional arrangements, from the North to the South of the peninsula, and include both large-sized cities (Milan and Rome), medium-sized cities (Bergamo, Vicenza, and Ferrara), and entire regions (the March of Ancona, and Sicily). This allows the reader to appreciate regional and local differences in detail, making this book of interest for academics and scholars in economic, social, and urban history.

Be the first to review Italian Victualling Systems in the Early Modern Age.