A stunning updated edition of this unrivalled volume by Australia's foremost wine industry expert, now with a brand new cover.
From deep, supple and mouth-filling Shiraz to golden botrytised Riesling, from delicious gooseberry and grass-driven Sauvignon Blanc to the generosity of sun-kissed Chardonnay, Australia produces wines that are among the best in the world. The diversity of Australian landscapes and soils ensures an optimal environment for every variety of wine grape, whether the cool climate of Tasmania for Pinot Noir, or the Mediterranean summers of the Margaret River in Western Australia for Cabernet Sauvignon. James Halliday analyses every wine region in Australia - and there are over seventy - in this definitive book. He studies the types of grapes grown, the soil, the climate, the winegrowing history, and also introduces the most famous and respected wineries, winemakers and their signature wines. Each section is sumptuously illustrated and features a specially created map highlighting geographic landmarks and the location of the wineries. James Halliday's Wine Atlas of Australia is a masterwork by Australia's leading wine critic and authority. 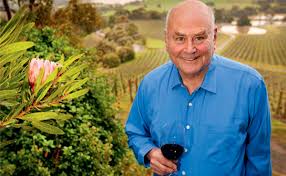 James Halliday is Australia's most respected wine critic, wine writer and vigneron. He regularly judges at wine shows both in Australia and overseas, and is a leading authority on all aspects of the wine industry.

James has written or contributed to no fewer than 70 books on wine and has been widely published around the world. As a founder of Brokenwood in the Hunter Valley, New South Wales, and then Coldstream Hills in the Yarra Valley, Victoria, James provides perspective on the wine world from the planting and pruning of vines through to the creation and marketing of the finished product.

His winemaking has led him to annual sojourns to Bordeaux and Burgundy where he owns a property. In 1995 James was awarded the wine industry's ultimate accolade, the Maurice O'Shea Award and in 2010 James was made a Member of the Order of Australia for services to the wine industry.

Be the first to review James Halliday's Wine Atlas of Australia.