Cultural Crossings between Japan and the West

by Lionel Lambourne and Beulah Davies

Coined by a French art critic in 1876, the term Japonisme was used to describe the craze for all things Japanese. Van Gogh copied Ukiyo-e prints, and art nouveau potters introduced flowing, organic themes, first seen in Japanese ceramics. This book presents a broad survey of the West's extraordinary love affair with Japan, beginning with the first contacts in the sixteenth century, and culminating in the artistic frenzy that swept Europe and America in the second half of the nineteenth century. For the first time, Lionel Lambourne also uncovers the countercurrent of Western influence on Japan. The book reviews not only the fine and the decorative arts but also interior decoration, costume and fashion accessories, literature and the theatre, travel, and gardens and plants

Be the first to review Japonisme. 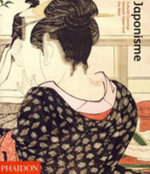 by Lionel Lambourne and Beulah Davies