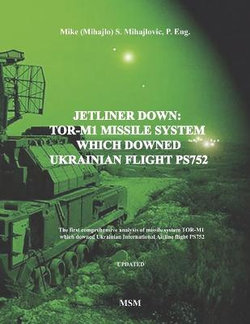 TOR-M1 or 9K331 (NATO code name SA-15 Gauntlet), the surface-to-air missile system is a mobile air defense system designed and manufactured by the Russian Defence Industry. Iranian Revolutionary Guard Corps has 29 units and one of these units is responsible for the downing of Ukrainian Airlines PS752 in the early morning of January 8th, 2020 near Tehran, Iran.The book intends to explain in detail what is this system, its capabilities, how it works, what are the major components, how the aerial target is acquired, how the missile is launched and guided to intercept the target, how the warhead is activated, and what are the effects on the target.This book places the reader in the missile launcher and describes the likely scenarios as well as the conspiracy theories that were developed because of the missing information and numerous speculations.The crash of PS752 will never be fully explained and understood without the knowledge of the missile system and how it works. The key to that tragic event lies in the full understanding of what happened inside that launcher in those critical minutes before, during and after the engagement.

Be the first to review Jetliner Down.