Be the first to write a review
Tweet
14%
OFF RRP  $77.99 $67.25
This item qualifies for FREE delivery
John Steinbeck was never content to repeat himself, and his restless search for new forms and fresh subject matter is fully evident in the books of his later years. This volume collects four novels that exhibit the full range of his gift, along with a travel book that has become one of his most enduringly popular works. In The Wayward Bus (1947), Steinbeck leads a group of ill-matched passengers representing a spectrum of social types and classes, stranded by a washed-out bridge, on a circuitous journey that exposes cruelties, self-deceptions, and unsuspected moral strengths. The tone ranges from boisterous comedy to trenchant satirical observation of postwar America. Burning Bright (1950), an allegory set against shifting backgrounds (circus, sea, farm) and revolving around the fear of sterility and the desire for self-perpetuation, marks Steinbeck's involvement with the drama in its fusion of the forms of novel and play.

Sweet Thursday (1954) marks Steinbeck's return, in a mood of sometimes frothy comedy, to the characters and milieu of his earlier Cannery Row. A love story set against the background of the local brothel, the Bear Flag, Sweet Thursday is for all its intimations of melancholy one of the most lighthearted of Steinbeck's books. It was subsequently adapted by Rodgers and Hammerstein into their musical Pipe Dream. Steinbeck's final novel, The Winter of Our Discontent (1961) is set in an old Long Island whaling town modeled on Sag Harbor, where he had been spending time since 1953. The book breaks new ground in its depiction of the crass commercialism of contemporary America, and its impact on a protagonist with traditionalist values who is appalled but finally tempted by the encroaching sleaziness.

Travels with Charley in Search of America (1962) was Steinbeck's last published book. A record of his experiences and observations as he drove around America in a pickup truck, accompanied by his standard poodle Charley, it is filled with engaging, often humorous description and comes to a powerful climax in an encounter with racist demonstrators in New Orleans.

LIBRARY OF AMERICA is an independent nonprofit cultural organization founded in 1979 to preserve our nation's literary heritage by publishing, and keeping permanently in print, America's best and most significant writing. The Library of America series includes more than 300 volumes to date, authoritative editions that average 1,000 pages in length, feature cloth covers, sewn bindings, and ribbon markers, and are printed on premium acid-free paper that will last for centuries.

John Steinbeck was born in Salinas, California, in 17 February 1902. After studying English at Stanford University, he held several jobs including working as a hod-carrier, apprentice painter, laboratory assistant, ranch hand, fruit-picker, construction worker at Madison Square Gardens, New York, and reporter for the New York American. In 1935 he became a full-time writer and was a special writer for the United States Army Air Force during World War II.

Among his most renowned works are Of Mice and Men, Cannery Row, East of Eden and The Grapes of Wrath, which won the Pulitzer Prize in 1940.

In 1926 Steinbeck was awarded the Nobel Prize for Literature as a mark of his outstanding contribution to literature, his unquestionable popularity and his versatility. In his speech accepting the Nobel Prize, Steinbeck gave his view of authorship: 'The ancient omission of the writer has not changed.

He is charged with exposing our may grevious faults and failures, with dredging up to the light our dark and dangerous dreams for the purpose of improvement. Furthermore, the writer is delegated to declare and to celebrate man's proven capacity for greatness of heart and spirit for gallantry in defeat - for courage, compassion and love.' John Steinbeck died on 20th December 1968. 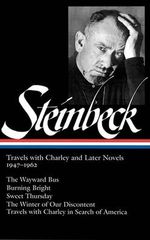 Contemporary fiction Classic fiction
Hold on while we process your request.