JR: Can Art Change the World?

The first major and in-depth retrospective monograph on JR, the enigmatic and anonymous Parisian photographer/street artist/activist behind some of the world's most provocative large-scale public photography projects.

Created in close collaboration with JR, this book includes all bodies of his work, his collaborations with other artists and institutions such as the New York Ballet and previously unpublished behind-the-scenes documentation of his studios in Paris and New York, where he and his creative collaborators live and work.

Introducing JR 's story is a specially commissioned graphic novel by comic artist Joseph Remnant, which charts his rise from graffiti roots and his decision to become a full-time artist.

Joseph Remnant is a Los Angeles-based artist/cartoonist whose work has appeared in Arthur magazine, New York Times, and Juxtapoz.

Nato Thompson is artistic director of Philadelphia Contemporary, and was chief curator of Creative Time from 2007 to 2017.

Be the first to review JR: Can Art Change the World?. 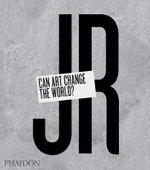 JR: Can Art Change the World?