The orginal Dredd epic complete, unexpurgated collected wuth the 'banned' material for the very first time Mega-City One, 2100. This post-apocalyptic city of the future is blighted by overcrowding, poverty and misery. With each of the 400 million citizens a potential criminal, order is maintained by future lawmen known as the Judges who have the power to act as judge, jury and executioner. Toughest of them all is Judge Dredd - he is the law A deadly plague developed during the brutal 'Great Germ War' has reached the futuristic metropolis of Mega-City Two, located on the West Coast of the USA. Charged with delivering a life-saving vaccine to the citizens of the disease-ridden city, Judge Dredd and a small crew of Judges, war droids and the lawbreaking biker, Spikes Harvey Rotten, must travel a thousand miles across the radioactive wasteland known as 'the Cursed Earth.' Experience the complete Cursed Earth saga, collected here for the first time - a sparkling action-packed parody from Pat Mills and John Wagner, complete with sumptuous color spreads from Brian Bolland and Mick McMahon.

Be the first to review Judge Dredd: the Cursed Earth Uncensored. 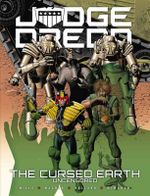