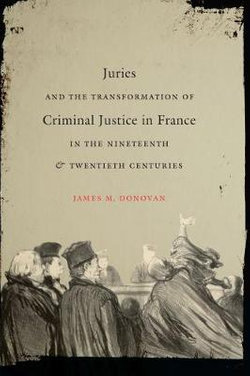 James Donovan takes a comprehensive approach to the history of the jury in modern France by investigating the legal, political, sociocultural, and intellectual aspects of jury trial from the Revolution through the twentieth century. He demonstrates that these juries, through their decisions, helped shape reform of the nation's criminal justice system.

From their introduction in 1791 as an expression of the sovereignty of the people through the early 1900s, argues Donovan, juries often acted against the wishes of the political and judicial authorities, despite repeated governmental attempts to manipulate their composition. High acquittal rates for both political and nonpolitical crimes were in part due to juror resistance to the harsh and rigid punishments imposed by the Napoleonic Penal Code, Donovan explains.

In response, legislators gradually enacted laws to lower penalties for certain crimes and to give jurors legal means to offer nuanced verdicts and to ameliorate punishments. Faced with persistently high acquittal rates, however, governments eventually took powers away from juries by withdrawing many cases from their purview and ultimately destroying the panels' independence in 1941.

Be the first to review Juries and the Transformation of Criminal Justice in France in the Nineteenth and Twentieth Centuries.