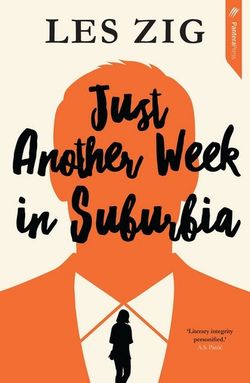 Just Another Week in Suburbia

Casper Gray goes to bed a happily married man. He wakes up questioning whether everything is a lie. Life in suburbia holds few surprises for Casper.

He and his wife Jane are still trying for a baby after seven years. His neighbours have their quirks to be navigated. And his job as a high school teacher, while satisfying, comes with its challenges.

Every day is much like the one before that is, until Casper makes a discovery that threatens everything he knows...

As Casper 's fears grows into obsessions, his world starts to unravel. Just Another Week in Suburbia is a story about love, trust, and insecurity, and the question of whether you can ever really know another person.

Les Zig has been telling stories since he was a kid, lying to get out of trouble. As a teenager, he worked out he could put his imagination to use telling stories, although this took a number of different forms.

As he 's grown older, he 's had stories and articles published in various print and digital journals, screenplays optioned, and written one whole poem.

He 's now interested in exploring the human psyche from the fears, quirks, and neuroses that drive us, to the dynamics of how people interact and react, how the world around them influences and sometimes predetermines their choices, and who they inevitably become. Les is the author of young adult novel Pride.

Just Another Week in Suburbia is his debut Adult fiction and will be launched at Melbourne Writers ' Festival.

Fiction Fiction For Her

Be the first to review Just Another Week in Suburbia.

Just Another Week in Suburbia