Harold II is chiefly remembered today, perhaps unfairly, for the brevity of his reign and his death at the Battle of Hastings. The papers collected here seek to shed new light on the man and his milieu before and after that climax. They explore the long career and the dynastic network behind Harold Godwinesson's accession on the death of King Edward the Confessor in January 1066, looking in particular at the important questions as to whether Harold's kingship was opportunist or long-planned; a usurpation or a legitimate succession in terms of his Anglo-Scandinavian kinships? They also examine the posthumous legends that Harold survived Hastings and lived on as a religious recluse. The essays in the second part of the volume focus on the Bayeux Tapestry, bringing out the small details which would have resonated significantly for contemporary audiences, both Norman and English, to suggest how they judged Harold and the other players in the succession drama of 1066. Other aspects of the Tapestry are also covered: the possible patron and locations the Tapestry was produced for; where and how it was designed; and the various sources - artistic and real - employed by the artist.

Be the first to review King Harold II and the Bayeux Tapestry. 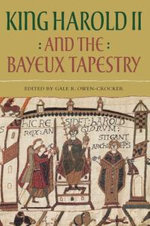