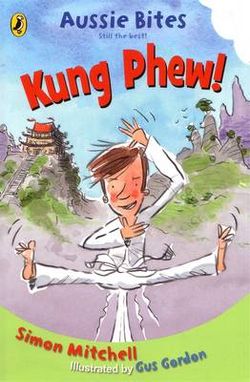 Marty (a.k.a the Baked Bean Bandit) and his farting coach Mr Windybottom are off to China at the invitation of Mr Windybottom's old guru Master Pong, leader of the Order of the Sacred Wind. Master Pong and his warrior monks have dedicated their lives to achieving a perfect balance of mind, body and flatulence, and they take their flatulent power from the sacred Beans of Destiny. When Marty arrives at Pong's monastery, he soon discovers that the monks are being challenged by the evil General Pu, who is determined to take the Beans for himself. Only Marty - now revealed as the Bum Whisperer of ancient prophecy - can defeat the forces of evil and bring eternal peace to the Order of the Sacred Wind. Once again, appalling puns and jokes make this story a brilliantly funny read.

Simon Mitchell worked as a computer programmer before deciding to branch out and 'try writing in a language that consisted of more than 1's and 0's'.

He has completed a Diploma in Professional Writing and Editing at RMIT, where he wrote the first draft of The Baked Bean Bandit.

Other titles by Simon include Do You Dare Tough Times, three Aussie Bites and a picture book Louie the Pirate Chef.

Gus Gordon is an internationally acclaimed illustrator and author. He has illustrated and written over 80 books for children. His illustrations are known for their loose and energetic line work, mixed media and humour.

His writing is always anthropomorphic. He attributes this to his love of Kenneth Grahame's Wind in The Willows. Gus's first picture book, Wendy, was a Notable Book in the 2010 Children’s Book Council of Australia (CBCA) Picture Book of the Year Awards.

His second picture book, Herman and Rosie, now published in twelve countries, has been internationally acclaimed and awarded.

Somewhere Else was published by Penguin Random House Australia in 2016.

Be the first to review Kung Phew!.

by Simon Mitchell and Gus Gordon