At the very end of the Ladies’ Frocks Departments, past Cocktail Frocks, there was something very special, something quite, quite wonderful; but it wasn’t for everybody: that was the point. Because there, at the very end, there was a lovely arch, on which was written in curly letters Model Gowns.

Written by a superb novelist of contemporary manners, Ladies in Black is a fairytale which illuminates the extraordinariness of ordinary lives. The women in black are run off their feet, what with the Christmas rush and the summer sales that follow. But it’s Sydney in the 1950s, and there’s still just enough time left on a hot and frantic day to dream and scheme…

By the time the last marked-down frock has been sold, most of the staff of the Ladies’ Cocktail section at F. G. Goode’s have been launched into slightly different careers. With the lightest touch and the most tender of comic instincts, Madeleine St John conjures a vanished summer of innocence. Ladies in Black is a great novel, a lost Australian classic.

Madeleine St John was born in Sydney in 1941. Her father, Edward, was a barrister and Liberal politician. Her mother, Sylvette, committed suicide in 1954, when Madeleine was twelve. Her death, she later said, ‘obviously changed everything’.

St John studied Arts at Sydney University, where her contemporaries included Bruce Beresford, Germaine Greer, Clive James and Robert Hughes. In 1965 she married Chris Tillam, a fellow student, and they moved to the United States where they first attended Stanford and later Cambridge.

From Cambridge, St John relocated to London in 1968 with the hope that Chris would follow. The couple did not reunite and the marriage ended. St John settled in Notting Hill. She worked at a series of odd jobs, and then, in 1993, published her first novel, The Women in Black, the only book she set in Australia.

When her third novel, The Essence of the Thing (1997), was shortlisted for the Man Booker Prize, she became the first Australian woman to receive this honour. St John died in 2006. She had been so incensed after seeing errors in a French edition of one of her novels that she stipulated in her will that there were to be no more translations of her work. 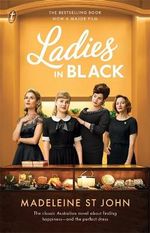 Contemporary fiction Classic fiction Read it before you see it
Hold on while we process your request.