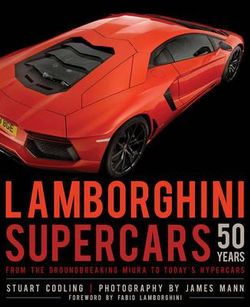 From the Groundbreaking Miura to Today's Hypercars

Immerse yourself in this complete guide on Lamborghini's ultimate performance cars.

Nearly 50 years ago, upstart high-end sports car manufacturer Lamborghini set the performance car world on its ear with its stunning supercar, the Miura. Wrapped in a svelte Marcello Gandini - designed body and powered by a 350-horsepower V-12, the Miura instantly made every other car look antiquated.

In 1974, Lamborghini again shocked the automotive world with the mad Countach (an Italian expression one might utter at the sight of a beautiful woman), another Gandini masterpiece. Wide, low, and menacing, the original Countach completely recalibrated the supercar template.

The Diablo replaced the Countach in 1990 and was the last of the Lamborghini supercars under the auspices of the "original" company. Audi acquired the company in 1997 and would bring significant German efficiency to bear, turning out supercars to a new template: the Murielago in 2001, the Gallardo in 2003, the Reventon in 2008, the Aventador in 2011, and, most recently, the appropriately named Huracan.

Each one is an ultimate car. Many were collector vehicles from the moment they rolled off the production line. Beneath their stunning bodywork lie chassis and powerplants bristling with the best technology of their respective eras. Lamborghini's latest supercars zip from 0 to 60 miles per hour in under 3 seconds and hit top speeds in excess of 220 miles per hour. Their prices are equally staggering.

Lamborghini Supercars 50 Years is devoted exclusively to all of Lamborghini's ultimate performance cars. No enthusiast of these world-class sports cars will want to miss it

Journalist and broadcaster Stuart Codling has worked in motorsports for over a decade, covering sports cars in the United States before joining F1 Racing, the world's best-selling Formula 1 magazine.

He has ridden pillion with World Superbike Champion Neil Hodgson, gone snowboarding with (former) FIA President Max Mosley, and been sworn at by ex-Ferrari F1 driver Eddie Irvine. He has appeared as an F1 expert on TV and radio, has hosted for Renault F1, and contributes to F1 Racing, Autosport, and Autocar.

James Mann is one of the world's leading car and motorcycle photographers, with more than 20 years of experience shooting for enthusiast publications, the motor industry, and businesses around the world.

His work has appeared within and on the covers of more than 40 books and has provided stunning visuals for numerous magazines, including Classic and Sports Car, CAR magazine, Automobile Quarterly, Automobile magazine, and many others.

His advertising clients include Aston Martin, BMW, and Toyota. James has provided the photography for numerous Motorbooks titles, including Art of the Formula 1 Race Car (2010, 2014), Form Follows Function: The Art of the Supercar (2011), and Le Mans Legendary Race Cars (2013).

Be the first to review Lamborghini Supercars 50 Years.

by Stuart Codling and James Mann