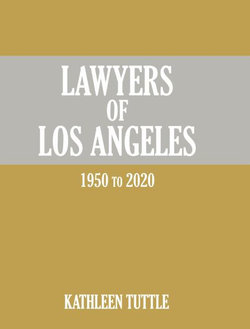 by Kathleen Tuttle
Hardback
Publication Date: 16/03/2021
Be the first to write a review
Tweet

The first history of Los Angeles lawyers published since 1951--the second volume in a series.

Lawyers of Los Angeles is an intriguing account of L.A. law from 1950 to 2020 - lawyers, the Los Angeles County Bar Association's growth and impact, civil rights, high-profile trials, advisors to L.A.'s creative culture, members of the bench and bar dedicated to the public good. Tuttle presents the untold story of a fascinating legal world, filled with extraordinary moments in L.A. history.&nbsp;

Kathleen Tuttle, born and raised in Los Angeles County, is a Los Angeles lawyer who graduated from U.C. Berkeley School of Law in 1978, where she served on the law review. She began her career in Washington, D.C., with the law firm of Wald, Harkrader & Ross, and then took on Capitol Hill, first as counsel to the U.S. House Democratic Caucus and then as minority chief counsel to the U.S. Senate Governmental Affairs Committee. In 1986, Kathleen returned home to private law practice at Alschuler, Grossman & Pines, and later joined the Los Angeles County District Attorney's Office. In her first five years as a deputy district attorney, she prosecuted scores of jury trials involving violent crime before being named Deputy-in-Charge of the office's Antitrust Section. Kathleen has assumed leadership roles in both the California Supreme Court Historical Society and the Chancery Club, where she became president in 2020. Her writing has appeared in the Los Angeles Times and the San Francisco Chronicle; this is her third book. She lives and writes in Pasadena.
&nbsp;

Be the first to review Lawyers of Los Angeles.