Featuring Anna, Elsa, Olaf, and All Your Favorite Characters!

With just a bit of practice, even beginning artists can draw all their favorite Frozen characters. This 64-page book features easy step-by-step instructions for drawing princesses Anna and Elsa, the hug-loving, sunshine-curious snowman Olaf, outdoorsman Kristoff and his loyal reindeer Sven, and Hans, Sitron, Marshmallow, and Pabbie. All you'll need to start drawing are a few supplies. And the easy-to-follow instructions in this book will guide you through each step, showing you how each step builds upon the last to create a finished piece of art.

You just need to grab a pencil and a piece of paper, and flip to the character you want to draw. You'll draw the basic shapes shown in step one, and move on to step two, step three, and keep going The new lines in each step are shown in blue, so you'll know exactly what to draw. After adding all the details in each step, darken the lines you want to keep and erase the rest. Finally, add color to your drawing with felt-tip markers, colored pencils, watercolors, or acrylic paints.

Plus, learn some fun facts about the characters as you learn to draw them. Brief character descriptions and art instruction from professional Disney animators round out this exciting artistic adventure to Arendelle. So grab your drawing pencils, paper, and a copy of Learn to Draw Disney's Frozen and get ready to draw


Breaking records within Walt Disney Studios' portfolio and the film industry at large, Disney's Frozen has risen to become the #1 animated film in history, as well one of the highest-grossing films of all time at the global box office. Audiences everywhere have been captivated by the magical story of sisters Anna and Elsa and the eternal winter that separates them and eventually brings them together again. The film's compelling songs, including the Academy Award-winning "Let it Go," have earned the Frozen soundtrack a certified triple platinum status and 13 weeks at the top of the Billboard album chart.

Be the first to review Learn to Draw Disney's Frozen. 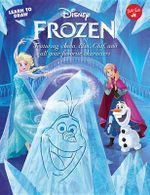