Be the first to write a review
Tweet
12%
OFF RRP  $64.99 $57.50
Throughout most of the twelve years between their formation and disbanding after the death of drummer John Bonham, Led Zeppelin were regarded as arguably the most influential group in popular music since The Beatles. While seen as pioneers of British heavy rock, their sound also embraced blues, psychedelia and folk music. Earlier in his career Jimmy Page had been one of the most highly sought-after session guitarists, while John Paul Jones was a versatile multi-instrumentalist and experienced arranger, and Robert Plant was one of the most individual vocalists of the era. A deal signed with Atlantic Records allowed them total musical control, and a deliberate policy of not allowing any tracks to be released as singles in Britain helped to ensure maximum demand for their albums as well as huge ticket sales every time they toured. Initially unpopular with critics, they were much loved by fans on both sides of the Atlantic and indeed throughout much of the world. This book provides a thorough examination of each track on all the group's studio albums, additional songs on official live releases and compilations of BBC sessions material.

Be the first to review Led Zeppelin Song by Song. 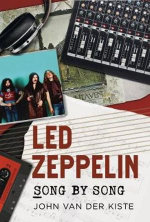