The first ever LEGO Pop-up book!

Packed with a variety of features: pop-ups, pull tabs, turning wheels and more, this ‘fun-formative’ book will be a delight for both LEGO and pop-up fans alike.

Matthew Christian Reinhart was born September 21, 1971 in Cedar Rapids, Iowa. Art was always a huge part of Matthew Reinhart’s young life. Drawing pictures and making crafts were his favorite activities, in school and out. Matthew drew whenever and wherever he got the chance; in fact, school notebooks often had more drawings than notes!

After graduating college, moved to New York City for a year before starting medical school. There, he met acclaimed children’s book author Robert Sabuda doing volunteer work together for a local community center. Robert’s book, Christmas Alphabet had just released to rave reviews, and he convinced Matthew to follow his true calling. The following year, Matthew attended Pratt Institute in Brooklyn. as an industrial design major (concentrating in toy design).

Pratt was fantastic experience for him, but his initial dreams of being a toy designer soon transformed into paper engineer. After working with Robert on books like The Wonderful Wizard of Oz, A B C Disney and Movable Mother Goose. Matthew made his first big break into the pop-up world with The Pop Up Book Of Phobias.

He continues to work and live in New York City, cutting, taping and folding paper into pop-up masterpieces.

Be the first to review LEGO Pop-Up. 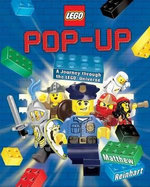