Solo to Sydney by Pony

Lennie the Legend
by Stephanie Owen Reeder
Not in stock...
Hardback
$24.99

This is the inspiring true story of nine-year-old Lennie Gwyther who, at the height of the Great Depression in 1932, rode his pony from his home town of Leongatha in rural Victoria to Sydney to witness the opening of the Sydney Harbour Bridge.

Lennie’s 1,000-kilometre solo journey captured the imagination of the nation, and his determination and courage provided hope to many at a difficult time in Australia’s history.

Lennie the Legend begins with a terrible accident on the family farm, when Lennie, remarkably at such a young age, takes on the responsibility for the ploughing. Lennie is obsessed with the marvel of the Sydney Harbour Bridge and, as a reward for saving the farm from missing the planting season, his parents grant him his wish to ride on his own to Sydney for the opening of the bridge.

Lennie has all sorts of adventures along the way - a thief lurking in the bush in the dead of night, a raging bushfire, surprise appearances, celebrations in his honour, being the star of a newsreel, and meeting the Prime Minister.

Stephanie Owen Reeder is an author and illustrator who lives in Canberra, the capital city of Australia. Stephanie grew up in the Northern Beaches of Sydney, where she spent many hours building houses in the sand, swimming, making cubby houses in the bush and, of course, reading and drawing. She wrote and illustrated her first 'book' aged just seven.

Her children's books include the internationally acclaimed lift-the-flap picture book about emotions, I've Got a Feeling, and her award-winning historically-based creative non-fiction titles Lost! A True Tale from the Bush and Amazing Grace: An Adventure at Sea. Her latest book is a lift-the-flap picture book about parts of the body and movement, Dance Like a Pirate. 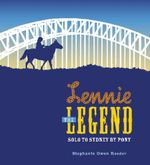