Three interconnected stories from three bestselling authors: John Green (Paper Towns, The Fault in our Stars), Maureen Johnson (The Name of the Star), and Lauren Myracle (The Internet Girls series.) Major motion picture in the works! A Christmas Eve snowstorm transforms one small town into a romantic haven, the kind you see only in movies. Well, kinda. After all, a cold and wet hike from a stranded train through the middle of nowhere would not normally end with a delicious kiss from a charming stranger. And no one would think that a trip to the Waffle House through four feet of snow would lead to love with an old friend. Or that the way back to true love begins with a painfully early morning shift at Starbucks. Thanks to three of today s bestselling teen authors John Green, Maureen Johnson, and Lauren Myracle the magic of the holidays shines on these hilarious and charming interconnected tales of love, romance, and breathtaking kisses. A New York Times Bestseller!"

Maureen Johnson was born in Philadelphia, but soon ran off to New York City to study writing and drama at Columbia University.

Along the way, she served up hamburgers in the company of mad scientists and talking skeletons in New York, worked in a bar in Piccadilly Circus, nervously worked alongside five tigers in Las Vegas, and once got mixed up with the entire cast of a major West End musical.

She is the author of The Key to the Golden Firebird and The Bermudez Triangle.

Be the first to review Let It Snow. 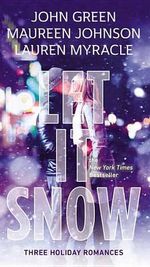