One of the most famous assaults of the Gallipoli campaign took
place over four bloody days in August 1915 across an area no
bigger than a football field.
On a small plateau in Gallipoli known as Lone Pine - named
for the lonesome pine that stood there - this fierce battle was
fought. In the late afternoon of 6 August 1915, the Australians
orchestrated an attack aimed at breaking the Turkish stronghold
on Lone Pine. The fighting on both sides during these attacks and
counter-attacks involved throwing bombs over hastily erected
barriers, mad dashes through the trenches, firing off a few shots
at close range, hand-to-hand combat, tripping over the dead and
avoiding the dying and wounded.
Four days of intense fighting and close combat resulted in the loss
of thousands of lives on both sides. In this short period of time,
seven of Australia's nine Gallipoli VCs were earned - a powerful
tribute to the courage and sacrifice of the soldiers involved.
Simon Cameron's painstakingly researched account, Lonesome
Pine, allows us to now gain a greater understanding of the sacrifice
of so many in such a short period of time. This book describes
the days leading up to the attack and the horror of the battle in
gripping detail, as well as giving an insight into the lives of the men
who fought, died in and survived the Battle of Lone Pine.

Be the first to review Lonesome Pine. 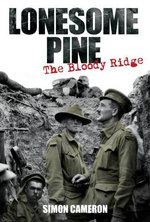