Twelve Stories after Cervantes and Shakespeare

by Yuri Herrera, Deborah Levy,  Ben Okri and others

"The lunatic, the lover, and the poet,
are of imagination all compact."
- William Shakespeare, A Midsummer Night's Dream To commemorate the 400th anniversary of the deaths of William Shakespeare and Miguel de Cervantes, And Other Stories and Hay Festival have selected twelve contemporary international authors to each write an original and previously unpublished story as their tribute to these giants of world literature. In order to celebrate the international influence of both writers and offer us new and intriguing perspectives on them, six English-speaking authors have taken inspiration from Cervantes and his work, while six Spanish-language authors have written stories inspired by Shakespeare. The authors are Ben Okri, Deborah Levy, Kamila Shamsie, Yuri Herrera, Marcos Giralt Torrente, Juan Gabriel Vasquez, Vicente Molina Foix, Soledad Puertolas, Hisham Matar, Nell Leyshon, Rhidian Brook and Valeria Luiselli. An introduction by Salman Rushdie explores the liberating legacy of Cervantes and Shakespeare for contemporary fiction. Deborah Levy writes fiction, plays and poetry. Her work has been staged by the Royal Shakespeare Company, and she is the author of numerous books, including the essay 'Things I Don't Want to Know' and the early novels Swallowing Geography and Beautiful Mutants. Her novel Swimming Home was shortlisted for the 2012 Man Booker Prize, 2012 Specsavers National Book Awards and 2013 Jewish Quarterly Wingate Prize.

Ben Okri is a poet and novelist and has published many books, including The Famished Road, which won the Booker Prize, and The Age of Magic. He has also written several poetry collections, including An African Elegy, Mental Fight and Wild. His work has been translated into 27 languages and won numerous international prizes. Born in Nigeria, he lives in London.

Be the first to review Lunatics. 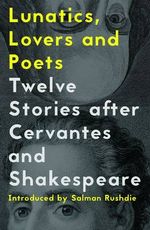 by Yuri Herrera, Deborah Levy,  Ben Okri and others