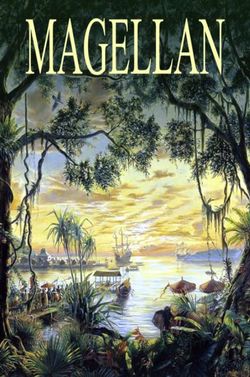 by Gaspar Correa, Antonio Pigafetta,  Francis Guillemard and others

Ferdinand Magellan was born in Portugal in 1480. In 1517, he went to Spain to see the teenaged Spanish king, the future Holy Roman Emperor Charles V. He sought and gained his support for the first voyage around the world. In 1519, by then Spanish, Magellan set out from Spain in command of a fleet of five ships. His aim was to sail around the southern tip of South America, even though it was then not known if there was such a route. From there he aimed to make the first ever journey across the Pacific Ocean to the tremendously lucrative Spice Islands, before completing his journey around the world by returning to Spain. The ship's crew saw lands, seas, animals, plants, fruits and peoples never seen by Europeans before, including a "camel without humps" (possibly a llama, guanaco, vicuna, or alpaca), and a penguin, that they described as a "black goose" that had to be skinned instead of plucked. They were astonished by the appearance of a Patagonian Giant - a man of gigantic stature on the beach, who sang and danced, pouring sand upon his head in token of amity.
Their epic voyage continued despite mutiny, starvation (which caused them to eat rats, hides and sawdust), scurvy, warfare, and treachery, that resulted in the considerable loss of lives and ships. Included are all of the first hand accounts of their dramatic voyage, recorded by Antonio Pigafetta, Francisco Albo, "the unknown Portuguese", Gaspar Correa, the "Genoese pilot", and by Maximilian Transylvanus.Of the five ships and more than 270 men that set out on that famous first voyage around the world, only one ship was to complete it, with only eighteen of those men aboard, but Magellan was not one of them. Magellan is part of a series of biographies, published by Viartis, concerning "The Voyages of Discovery" including : Vasco da Gama, Magellan, Pedro Cabral, Bartolomeu Dias, and Amerigo Vespucci. Between them they discovered and opened up much of the then unknown world. [Data provided by Nielsen]

Be the first to review Magellan. 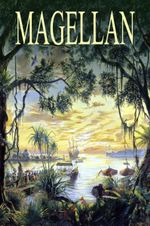 by Gaspar Correa, Antonio Pigafetta,  Francis Guillemard and others

Biography: historical Geographical discovery & exploration
Hold on while we process your request.