A Cinderella story starring the bestselling female musical artist of the millennium. Mariah Carey grew up in a broken home, poor and with no friends. Singing was her salvation. One day, at a music industry party, another musician slips executive Tommy Mottola a demo tape of Mariah. In the limo on his way home Mottola is bored, so he listens to the tape. Mariah's voice is like liquid gold. He goes back to look for her. But just like in the Cinderella story, she has slipped away.
Mottola follows the tracks of Carey's slipper and immediately signs her on. In 1990, at 21, she becomes an instant star. Her debut album sells more than seven million copies in the U.S. And she ends up marrying Mottola, her Prince Charming.
Marc Shapiro's new biography charts this Cinderella story in which Carey becomes the biggest selling recording artist of the 1990s, selling 115 million albums worldwide. Carey is the only musical artist to earn a #1 single every year of the last decade. At the beginning of this decade, fans are anticipating her new movie and soundtrack to All That Glitters (March 2001).
Shapiro's new book also includes coverage of Carey's personal life: her love of cats and dogs, riding horses and roller coasters, and watching Marilyn Monroe movies; her eventual break-up with Mottola, revealed to have physically abused Mariah and kept her prisoner in their mansion; and her recent bizarre behaviour at live shows like her fondness for the striptease.
"This book provides a good overview of Carey's life and career to date and is easily readable. Her fans definitely will love it."
-- Voice of Youth Advocates, June 2002

Be the first to review Mariah Carey. 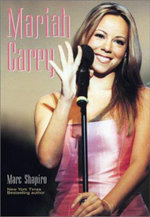