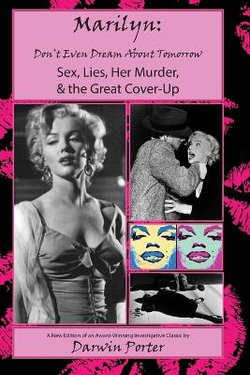 MARILYN, Don't Even Dream About Tomorrow

Sex, Lies, Her Murder, and the Great Cover-Up

Set in the months that preceded the murder of megastar Marilyn Monroe. this investigative report challenges the myths and assumptions that have, for decades, been repeated repetitively and inconclusively within the canon of half-truths widely circulated about her career and death.


In it, celebrity biographer Darwin Porter has compiled, with commentary, an intriguing roundup of the conspiracies and dark secrets behind Hollywood's most notorious mystery: WHO KILLED MARILYN? It examines the mass hysteria that followed in the wake of her assassination. No death in the 20th century, other than that of JFK himself, ever sparked more cover-ups, lies, criminal thefts of vital data (including body parts) bribes, perjury, myths, incompetent investigating, distorted medical records, unauthorized leaks, outrageous rumors, and a blitzkrieg of bizarre books with theories that obscured more than they revealed.


Like the Sirens of Greek mythology, Marilyn was an irresistible temptress who captivated powerful men. On her road to ruin, the once-vulnerable waif had mutated into a temperamental vixen, seducing and then provoking players who presided over the economic and military mechanisms of the Free Word and the innermost sanctums of organized crime. Filled with rage, hysteria, and depression, "and fed up with Jack's lies, Bobby's lies," she sought revenge and public vindication. Her revelations at an imminent press conference could have toppled political dynasties and destroyed criminal empires. Marilyn had to be stopped.


Its sometimes disturbing arguments treat the reader like a member of a jury, laying out evidence, stripping it of its links to the self-interest of whoever gave it, and separating what really happened from thousands of distorted and misleading testimonies. The rendering of history's final verdict was, until now, crippled because of eyewitnesses who radically changed their testimonies as many as three times as the years drifted by.


Into this steamy cauldron of deceit, Marilyn herself emerges as a most unreliable witness during the weeks leading up to her murder. Her own deceptions, vanities, and self-delusion poured toxic accelerants on an already raging fire.


In the aftermath of the shattering events of August 5, 1962, as Marilyn's nude body--an object of desire for literally thousands of men--was wheeled in for voyeuristic doctors to examine and dissect, a legend was already being born. This book from Darwin Porter will change, forever, how the world interprets the death and legacy of the most famous actress to ever emerge out of Hollywood and "The American Century."

Be the first to review MARILYN.

MARILYN, Don't Even Dream About Tomorrow