The first comprehensive monograph on Mario Bellini, one of Italy's most versatile and influential designers.

A key figure in the emergence of Italy as an important centre fore design in the 1960's, Mario Bellini is renowned for his elegant, dramatic and often poetic designs for, among others, Olivetti, Cassina, B&B Italia, Vitra and Artemide.

He was the subject of a one man retrospective at the Museum of Modern Art in 1987, the recipient of eight prestigious Compasso d'Oro industrial design awards, the Editor in Chief of the influential architecture and design magazine Domus (1986 91) and continues to produce architecture and design for clients and locations all over the world.

Enrico Morteo is an architect, editor, publisher, curator and a consultant of design and architecture. He has curated of a number of important programs and exhibitions including the ADI/ Compasso d'Oro Historical Collection, the Programmare l'arte exhibition for Venice and Milan, 2012 2013, the Uniqueness of Italy exhibition in Rome at the Palazzo delle Esposizioni in 2011, the Roberto Sambonet exhibition held in Turin, Brasilia and Sao Paulo in 2008 09 and the exhibition Olivetti: Una bella societa shown in Turin in 2008.

Enrico is also the author of a number of books including Grande Atlante del Design and the History of Architecture chapter of the Architecture Encyclopedia Garzanti. He has also worked with major Italian design magazines including Domus, Interni, Abitare, Modo, Lotus and Rassegna.

His other cultural contributions include his appointment as Scientific Advisor for the Torino 2008 World Design Capital, his professorship of History of Design at Universita IUAV di Venezia (1997 2000), and, since 1993, he has been the author of radio and television programs for the Italian National public broadcasting services Radio3 and RaiSatArt.

Be the first to review Mario Bellini . 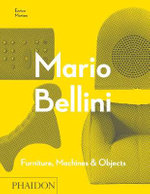