by Joe Caramagna, Karl Kesel,  Ron Lim and others

It's a super hero extravaganza, and you're invited Be sure to grab a front row seat when Saturnalia pulls back the curtain on the Interstellar Circus Spectacular But there's far more to its three rings than meets the eye. Will the Circus' star acts be too much to handle for its all-new attractions - Spider-Man, the Avengers and the Guardians of the Galaxy? It's all fun and games until everyone gets hurt Plus, the Avengers take on some of their all-time greatest foes We're talking bads as big as Red Skull, Loki, MODOK, Doctor Doom, Attuma and...Dracula Who's more powerful, Earth's Mightiest Heroes, or its Vilest Villains? There's only one way to fi nd out - fight COLLECTING: MARVEL SUPER HERO SPECTACULAR 1, AVENGERS VS 1, AVENGERS VS INFINITY 1, MORE

Dario Brizuela was born in Buenos Aires, Argentina, and as a teen he began studying in an art school-doing drawing, sculpture, painting, and more. After discovering superhero comic books, his goal was draw his favorite characters.

Be the first to review Marvel Super Hero Spectacular. 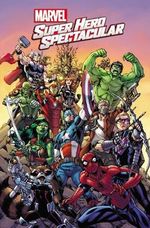 by Joe Caramagna, Karl Kesel,  Ron Lim and others