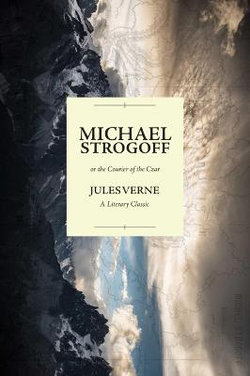 Michael Strogoff; or the Courier of the Czar

Originally published in French in 1867, Michael Strogoff, or, the Courier of the Czar, is regarded as one of Jules Verne's greatest novels. This intriguing tale set in Russia tells the story of one man, Michael Strogoff, the Czar's courier, who is set out on an impossible mission to save his country. A traitor inspires the dangerous Feofar Khan to invade Siberia and form a rebellion, leading to a plot to kill the czar's brother, the Grand Duke. As a result, Strogoff is sent out to warn the Duke, serving as the nation's last hope to cease the rebellion. Along the way he meets new people, makes new friends and gets capture by the enemy, only to make a grand escape. Readers are sure to be at the edge of their seats as they follow the courier's adventures through Siberia. Though this book is not one of the many science-fiction books that Verne is so highly regarded for, it utilizes the scientific phenomenon as a major plot device, allowing readers to nevertheless enjoy his profound literary voice and follow the protagonist on an unforgettable adventure.
"Jules Verne's imagination has given us some of the greatest adventure stories of all time" --Daily Mail "The reason Verne is still read by millions today is simply that he was one of the best storytellers who ever lived."--Arthur C. Clarke "This edition of what symbolically and psychoanalytically must be his richest text will, however, do much to encourage a more just appreciation..."--The Modern Language Review on Journey to the Center of the Earth by Jules Verne Skyhorse Publishing, as well as our Arcade, Yucca, and Good Books imprints, are proud to publish a broad range of books for readers interested in fiction--novels, novellas, political and medical thrillers, comedy, satire, historical fiction, romance, erotic and love stories, mystery, classic literature, folklore and mythology, literary classics including Shakespeare, Dumas, Wilde, Cather, and much more. While not every title we publish becomes a New York Times bestseller or a national bestseller, we are committed to books on subjects that are sometimes overlooked and to authors whose work might not otherwise find a home.

Jules Verne (1828-1905) was a French novelist and playwright best known for his epic adventures, including Twenty Thousand Leagues under the Sea, Journey to the Center of the Earth, and Around the World in Eighty Days.

A true visionary and master storyteller, Verne foresaw the skyscraper, the submarine, and the airplane, among many other inventions, and he is often regarded as the 'Father of Science Fiction.'

Be the first to review Michael Strogoff; or the Courier of the Czar.

Michael Strogoff; or the Courier of the Czar